If ever there was something I struggled organizing it would be kids keepsakes. This would include all those cute things you keep when they are little. Cards from grandma, school papers, awards, art projects. What in the world do you do with all of that stuff??? And why is there so much of it?? I shared almost a year ago about this dilemma and I’m happy to report that it has been resolved!! I pared this mess way down. 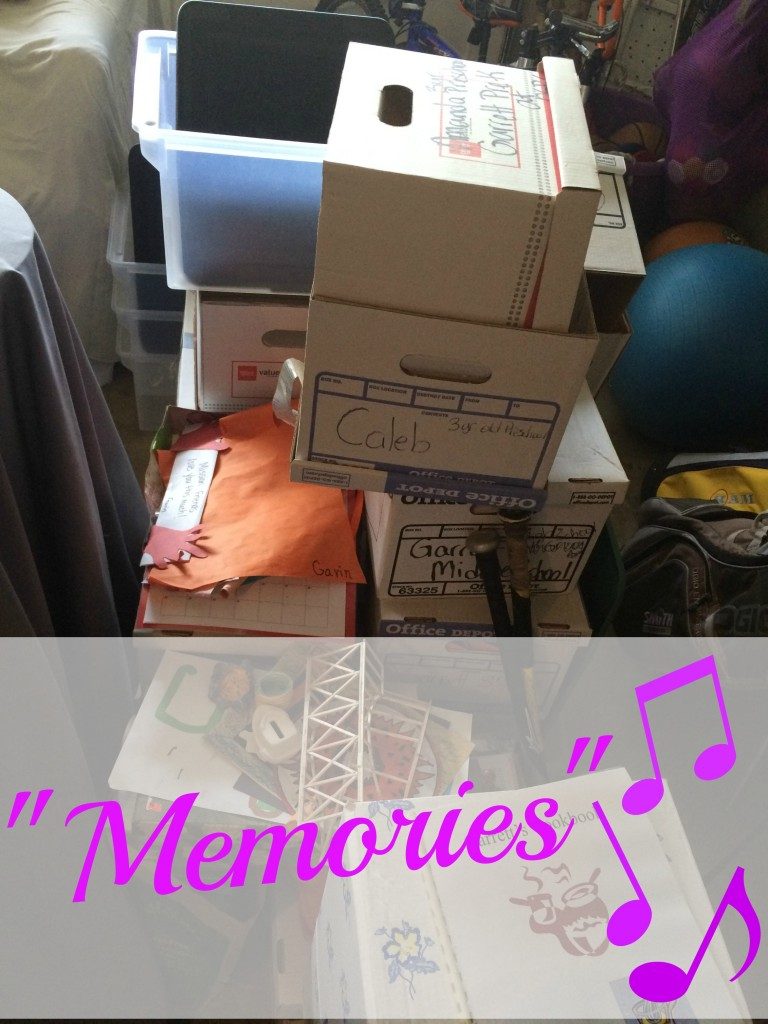 And, now we have this!! Cue the angels singing!!! 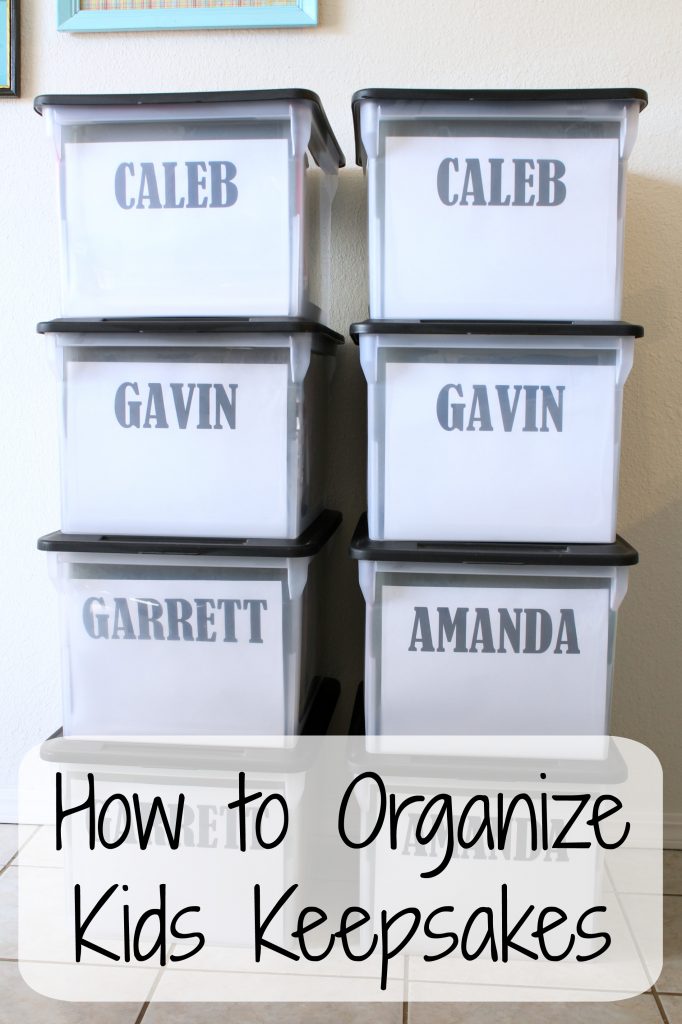 Which is not only more manageable, it is also organized! I must confess that the first picture doesn’t even show half of what I was working with! For months as I was cleaning closets throughout the house, I just kept finding places where I had stuffed random stuff. (face palm). So, how did we get from point A to point B??

Well, let me tell you…lots and lots of hours of sorting and purging. Yes, I said purging. I probably threw out a couple of large garbage bags worth for EACH CHILD. I seriously think I kept EVERYTHING when they were young. 😳

My goal was to get everything down to two of these plastic filing tubs. I managed to get it down to two filled with papers, and another one filled with all the 3-D stuff that I can’t squish. Not bad!! Now at least they won’t need a U-Haul to move it all when it’s time for them to take it to their house! 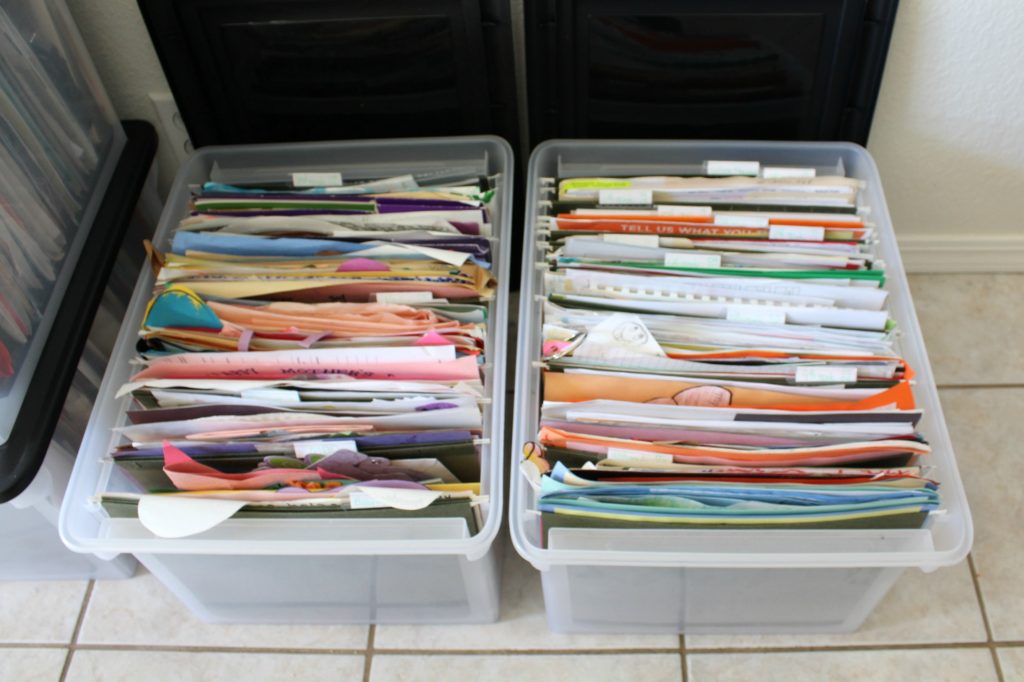 Each file box has file folders labeled by year and school year. 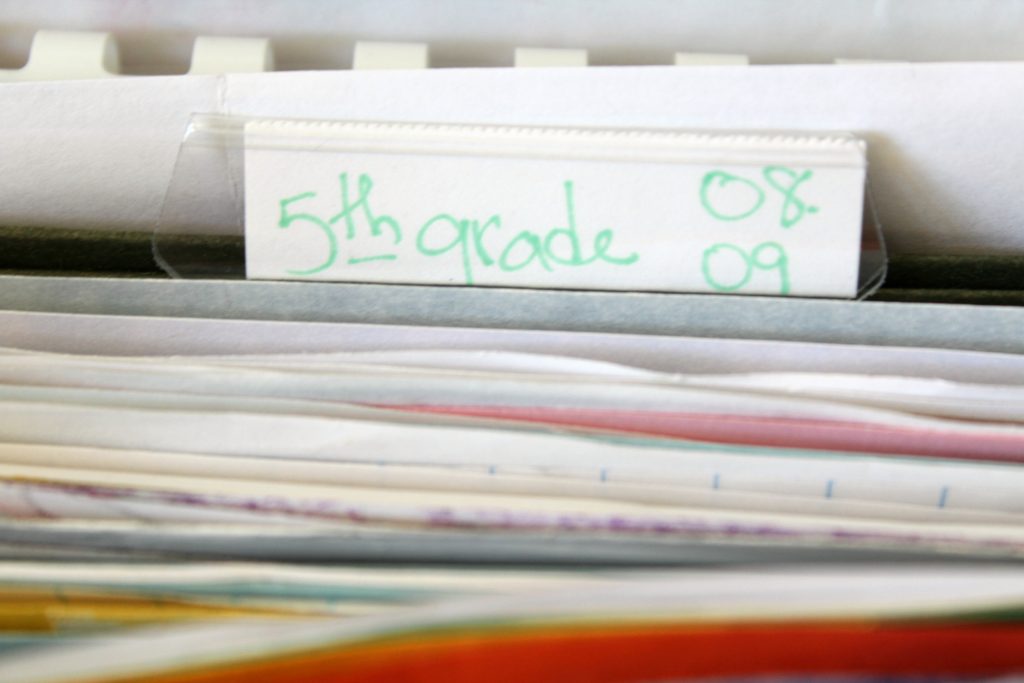 I then labeled each box by printing their names in a LARGE font and slipping the paper in the front of the tub. (If you have a cricut you could make a cool vinyl label. 😉 )

It’s a pretty straightforward system that you may have seen before. It’s floating all over pinterest. I love that a lot of people have been able to cut down to one tub. But, considering where I started I think what I ended up with is pretty awesome! Now to the attic they go!!

Another idea I saw was to photograph all your kids’ artwork and create a photo book of it all. (Maybe one a year??) That is a great idea if you are just starting out with littles, but I cannot imagine how long that would have taken me with four kids worth of artwork to get through!

I would strongly suggest to you mother’s of littles to find a way that works for you, and organize as you go. You will save yourself lots of headaches by not having to do it all at once!!

Whether your gathering is large or small, a pretty

I played “set the table” yesterday to distract

Happy Friday friends! We made it to another weeken

My zinnias might be dying but I’ve got two bags

Hey there friends!! Fall has fallen here in Oklaho

Do you meal plan?? It happens in seasons for me. S

Your home's entryway is kind of like your home's f

Happy Monday friends! I’m thinking it might be t