I’ve finally recuperated from the kitchen tiling job enough to share it with you! Haha! But, seriously, it was a much bigger job than I anticipated. It’s done though, and I LOVE it!! 🙂 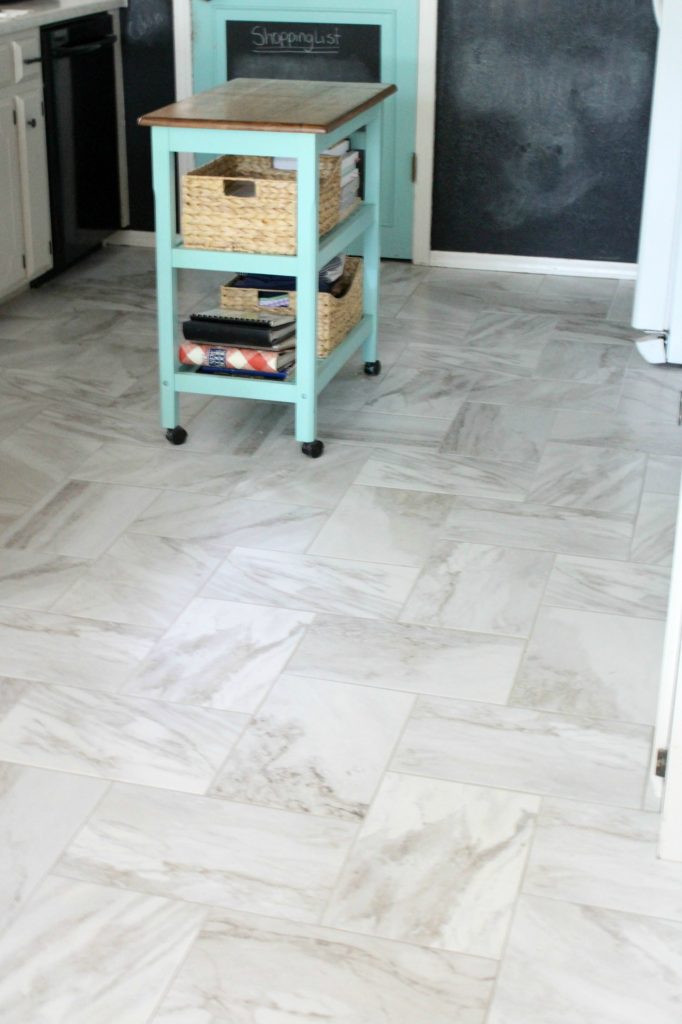 If you follow me on Instagram, which I think y’all know by now, that’s where I share the day to day stuff. Then you may have seen this strange photo. 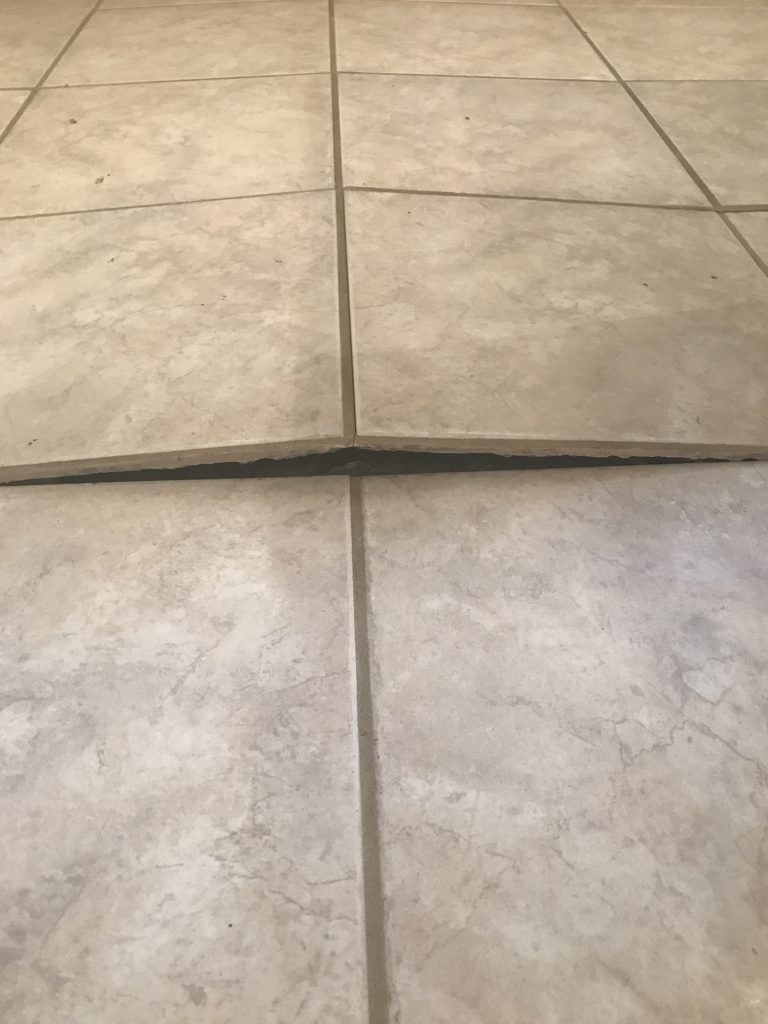 I was home one night, minding my own business, cooking dinner outside on the grill when this happened. I was walking out the back door when I heard a pop. I turned around, wondering what it could be, and I saw that the floor had just buckled up.  😯 I’m still not exactly sure what caused it. We did have a small earthquake that morning, but who knows. No matter what caused it, we had a little bit of a hazard now in the kitchen.

We quickly turned lemons into lemonade and went tile shopping!!

I picked out two options. Both that I really liked. However, I knew one would REQUIRE a complete overhaul of the rest of the kitchen. Whereas the other would not. I would still like to make some other changes eventually of course, but I would like it to look somewhat cohesive until the time is right for that.

Next up, demo. And, this by far, might have been the hardest work I’ve ever done. The first part of the floor came up super easy, and we thought we had it made. 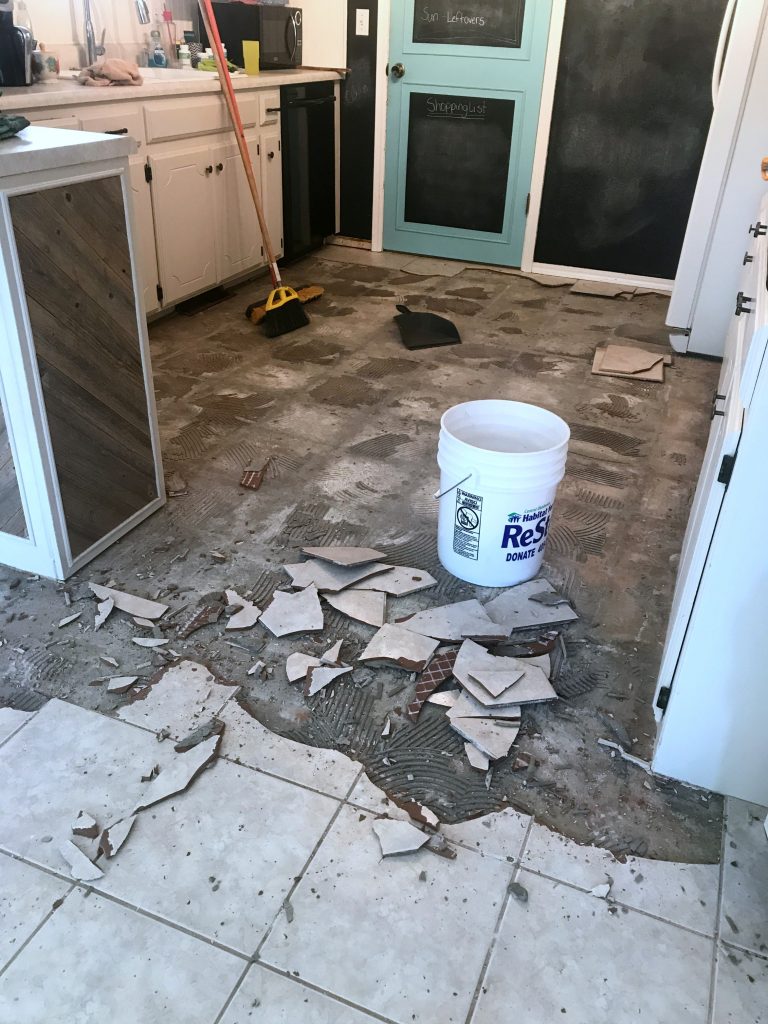 But when we started on the second half, we realized all too quickly that we were going to be there for a while. A sweet friend saw my insta-story whining about the situation (haha) and sent her husband for back-up. And, I’m so glad she did, because honestly I’m not sure I would have been able to do half the work he was able to do!! I also have to give my youngest son a lot of credit, he was in there banging away at the tile the whole afternoon. 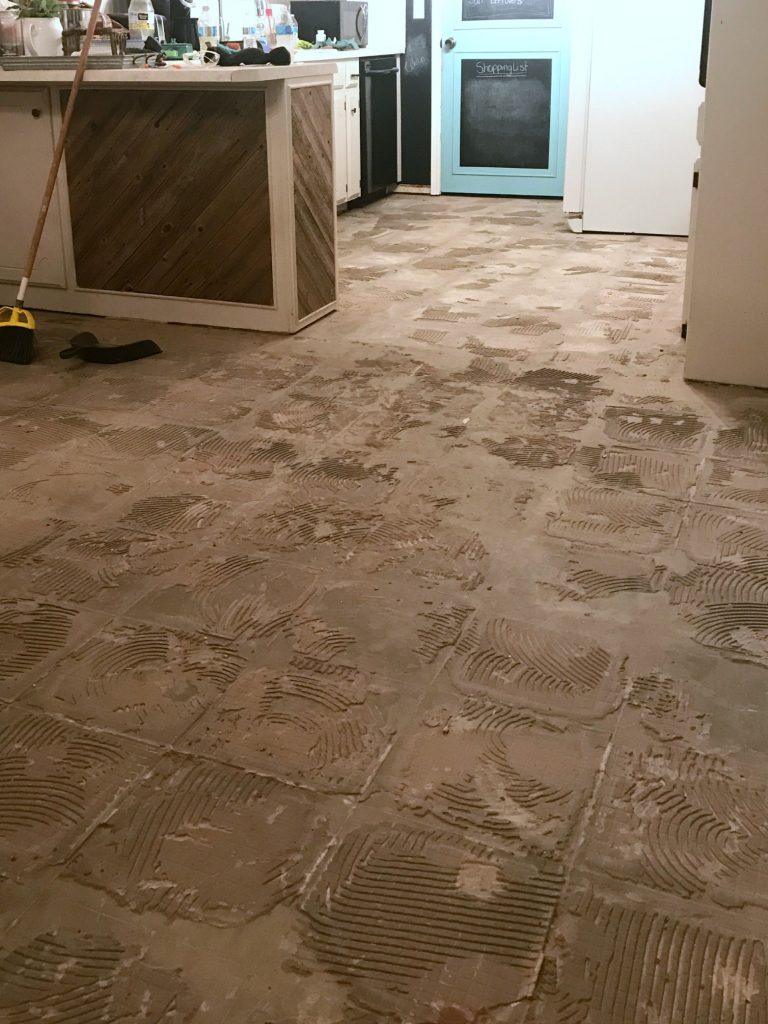 So, at the end of the day we finally had a tile-less floor. 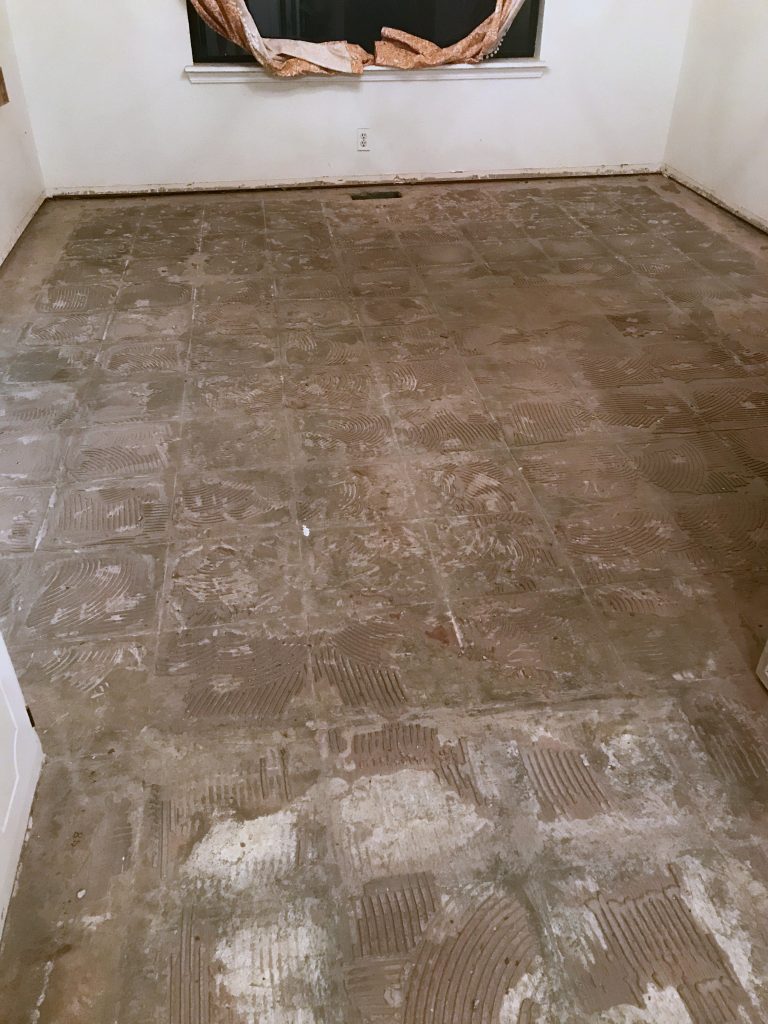 The next couple of days we worked on removing the thin set. Which, to be honest was just about as difficult. We finally ended up renting this bad boy, and it took care of it in a hurry, with a lot of mess left behind.  (and yes, I should have taken the time to take down my drapes, not sure why I didn’t) 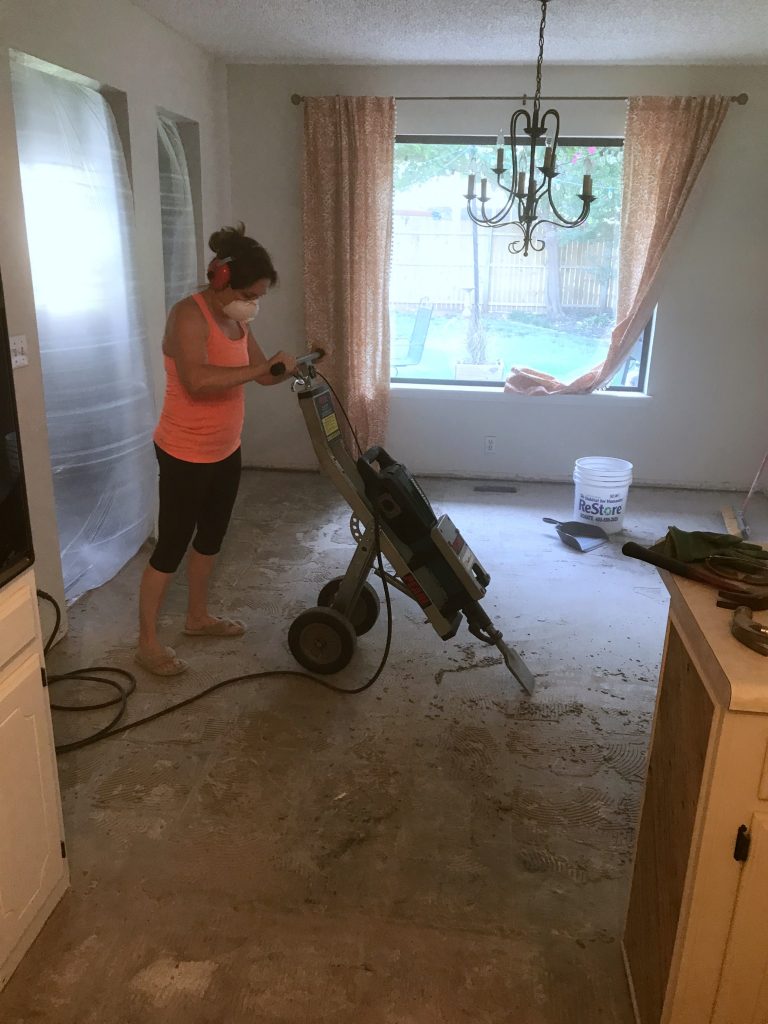 Finally it was time to tile!! This took a week. 🙂 Three days to tile the middle – all the full pieces, one day to cut all the pieces, and another day to adhere all the cut pieces. Oh yes, and then another day to grout. Whew! I’m tired all over again just thinking about it!! But now it’s done and it’s beautiful!! 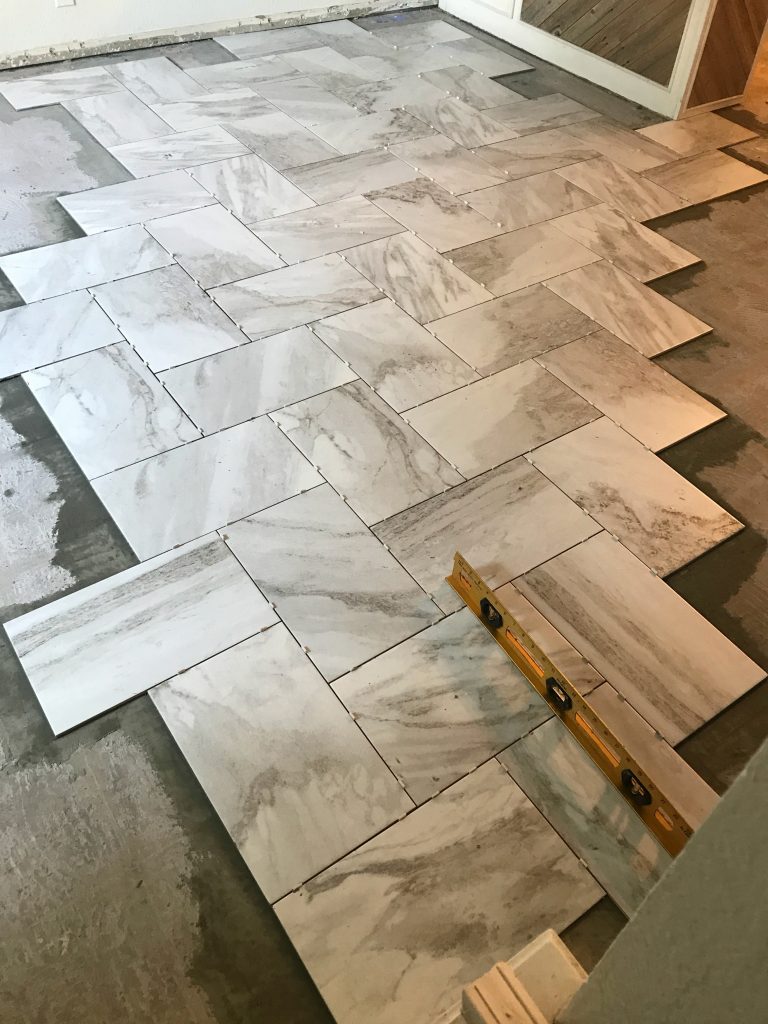 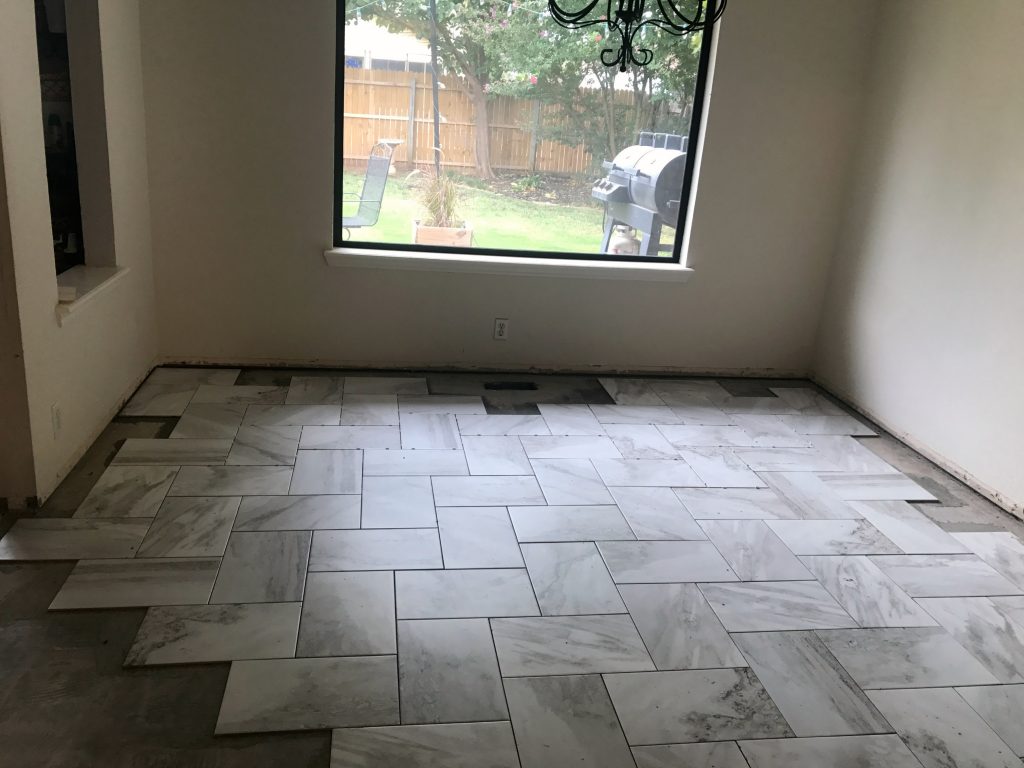 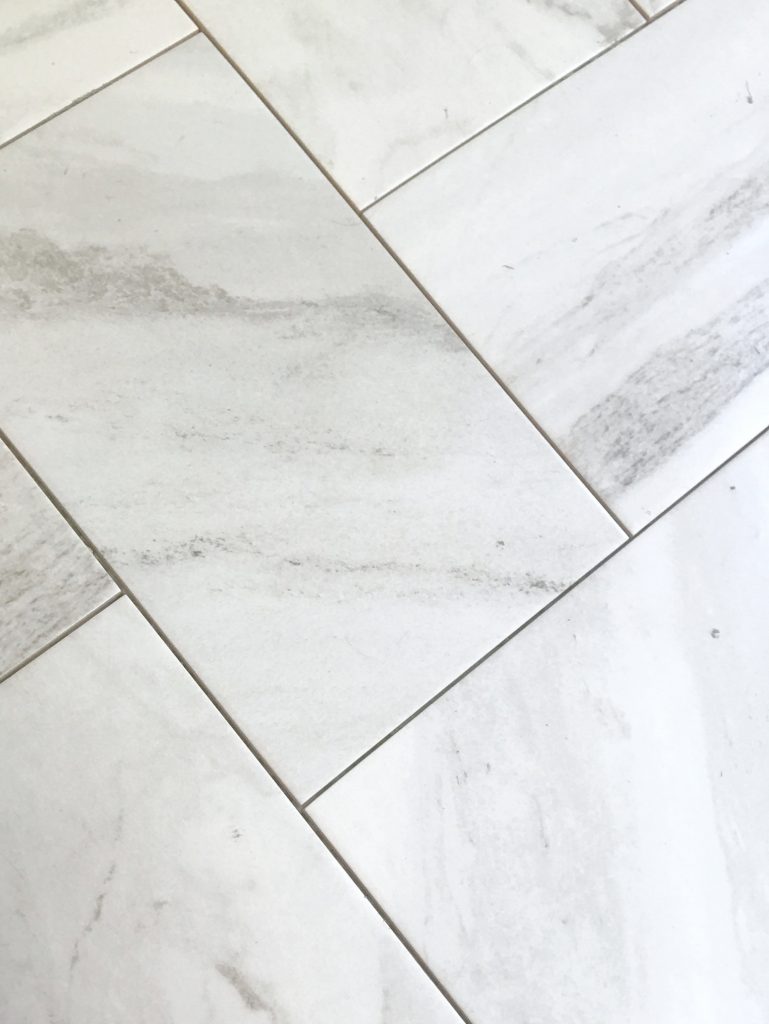 Here’s a side by side before and after just for fun. I love the look that it gives the space!! 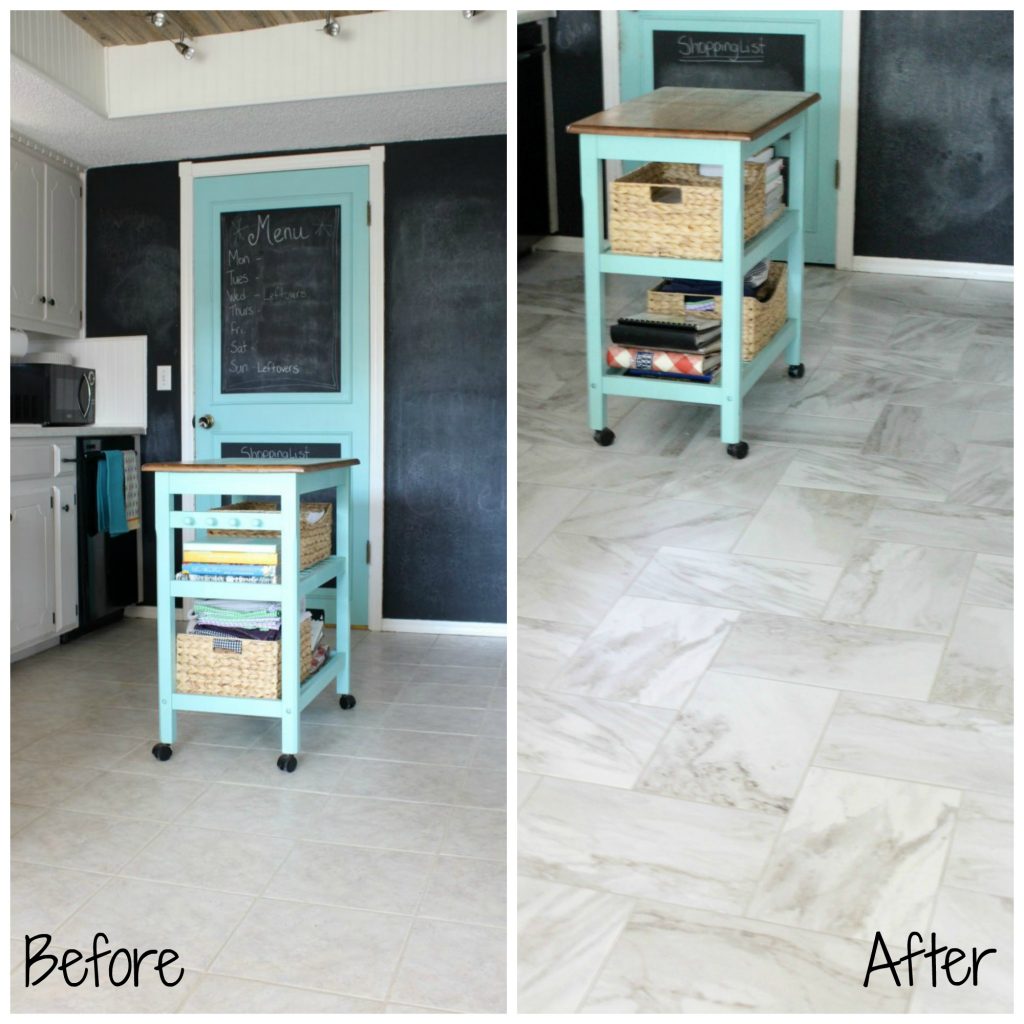 I set the tile in a straight herringbone pattern. Which I love. Here is a close-up of the pattern and the tile. We went with a lightish gray grout. 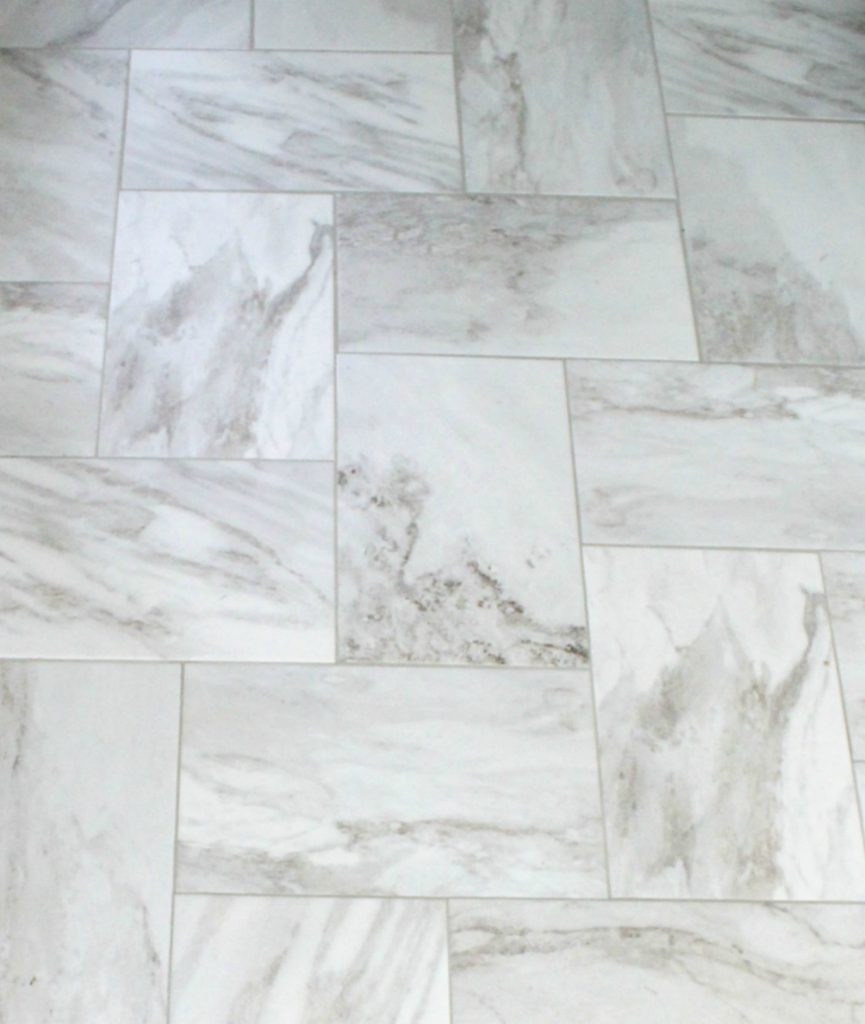 I still have a few details to take care of – patching up the trim, and adding some shoe molding that I’ve always thought would be a good idea. But, for now, another project in the books!!

Previous Post: « Frazzled Friday – Who’s Ready For Back To School?
Next Post: I Do BBQ Rehearsal Dinner and S’more Love »