Sorry I missed a week or two of Family Friday, but I was doing family stuff :).  Today I want to speak to teenage parenting.  How much freedom should I give my teenager?  How old should they be to date?  What’s an appropriate curfew for different ages?  When should my daughter be allowed to wear makeup?  When should they be allowed on social media sites?  When do they need a cell phone?  Should I be monitoring their Internet usage?  Should I monitor their social media activity? Do they deserve privacy?  All valid questions right??

Well I am here today to maybe challenge your thinking. As our kiddos approached the land of teenagers, we began discussing how we might handle things just like these.  As we were discussing we stopped.  We were entering foreign territory as parents.  We didn’t really know what we wanted to do, but we didn’t necessarily want to do it the way our parents did.  And, honestly, we knew we couldn’t because the world is a different place now.

We decided that some of these things that kids expect today, were actually privileges that would need to be earned – freedom to do things, privacy, later curfews for example.  Then some things were to be regulated by us, and the rule would be close to the same for all the children – cell phone, and social media, and Internet usage.  Then others would need to be decided on a case by case basis – dating, makeup, curfew. 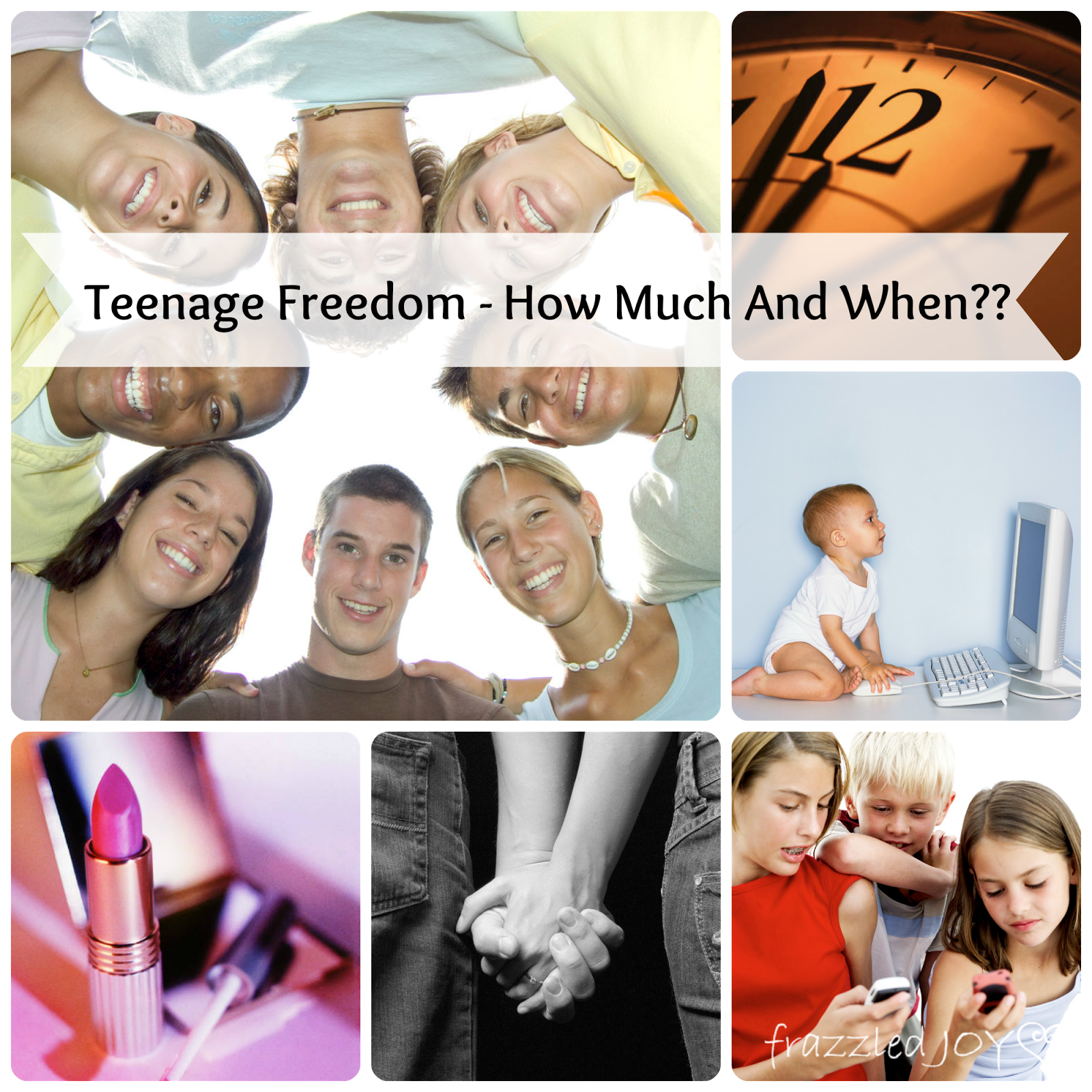 We decided when WE thought it was appropriate for our kids to have cell phone, or social media accounts. We did not consider what their friends were doing or what other families were doing. This was all about us and our family standards.

My kids expected freedom, respect, and trust to just be given to them.  Sorry, for me and my hubby that just didn’t work.  We were teenagers once…  Freedom came from showing us they could be responsible. Responsible with checking in, being home at the time that was agreed on, and making good choices while they were out.  Privacy doesn’t come easy.  We have a family computer that stays in the living room.  We have wi-fi in our house, but they are not allowed to have laptops in their rooms.  The Internet can be a bad place people. Social media can be fun, but it can also be a bad place. Keep an eye on your kids activity.  I am always “creeping” on my kids stuff, and I’m very open about it. At first it was weird for my oldest, but now he’s over it and doesn’t care (also, I’m hardly checking on my 18yr old these days – don’t tell him though ;)).

Trust is an iffy one.  It’s hard to get and hard to keep. For me, if my kids tell me something, I’m going to believe them unless they give me a reason not to.  I got my bluff in on them early, because I have my ways of finding out things.  They have just learned that it is hard to get one past mom.  But, by being responsible and trustworthy my teens have earned that trust.

I have seen too many teens make one or two bad choices that leads them down a road they may not have chosen.  But, now they are stuck.  It only takes one or two bad choices to get you there. As a mom of teens I want to have every opportunity to intercept them before those bad choices are made.  I’m not naive.  I know I can’t be there all the time, and I don’t want to be.  But, I’m also not naive enough to think my kids are solid enough to have all freedom, privacy, and trust from the get-go.  Baby steps folks, baby steps.

In my opinion, every kid is different.  That’s why we chose to set some things as they come.  While one of our kiddos might be more responsible and be ready for a later curfew at 16, the next one might not be.  So, why set an age precedent.  Roll with the punches, and know your kid!!  🙂  Don’t tell your daughter “you can wear make-up when you’re 13” when she may not want to wear make-up then.  Maybe she’d be fine to wait until she was 15.  Don’t tell your kids “you can’t date until you’re 16” when they may not be interested in dating this soon.  Sometimes these arbitrary dates make kids excited about things they would otherwise not even give a second thought, or you put yourself in a position of having to allow them to do something they’re not ready for.

Teenage land is a scary, emotional roller-coaster, fun time.  Wallow in it.  Enjoy every moment. Celebrate their uniqueness.  God created them to be the person they are – perfection in the making.

I'm back with another Friday Finds post on the blo

One more before and after of our bathroom (swipe t

This is where I spend just about every morning (un

My zinnias are blooming and I’m loving it! Such

Good morning friends! Hope your Monday is off to a

It’s done and we love it!! There were a couple o

In honor of tomorrow being #oneroomchallenge revea