My little craft project is complete and hung and it just makes me so happy!!  After seeing this go up I am super pumped to about the other colorful touches I have planned!!  So, here it is 🙂 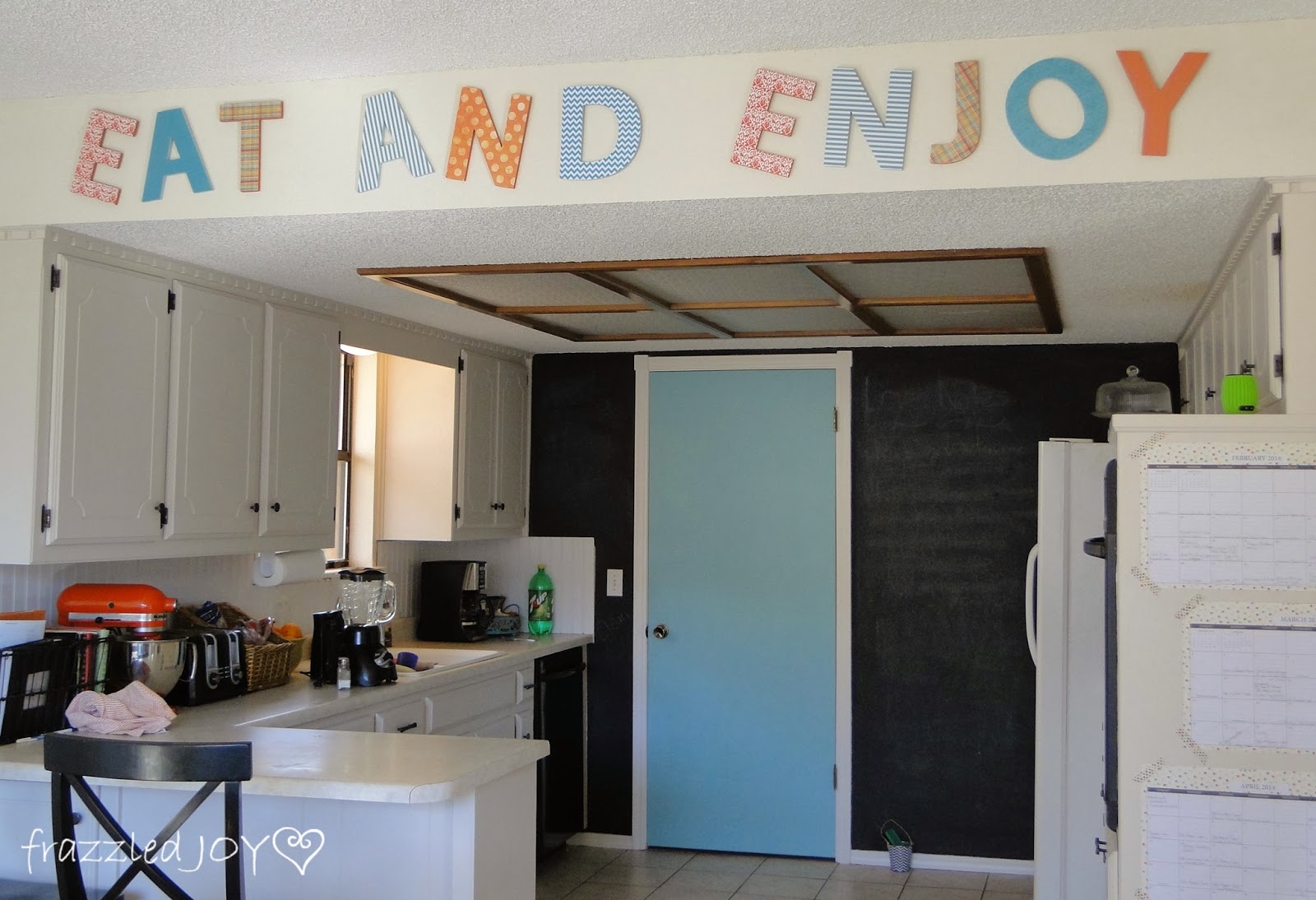 Isn’t it fun?!? {Please ignore the bit of mess in the background – that is progress in the making on another project – and yes the ugly brown light box is still there, baby steps folks.}

It was an easy and inexpensive project that has been in my head for years, and again one of those things I wish I hadn’t waited so long to do.  We all need a little more whimsy and fun in our lives amen?? 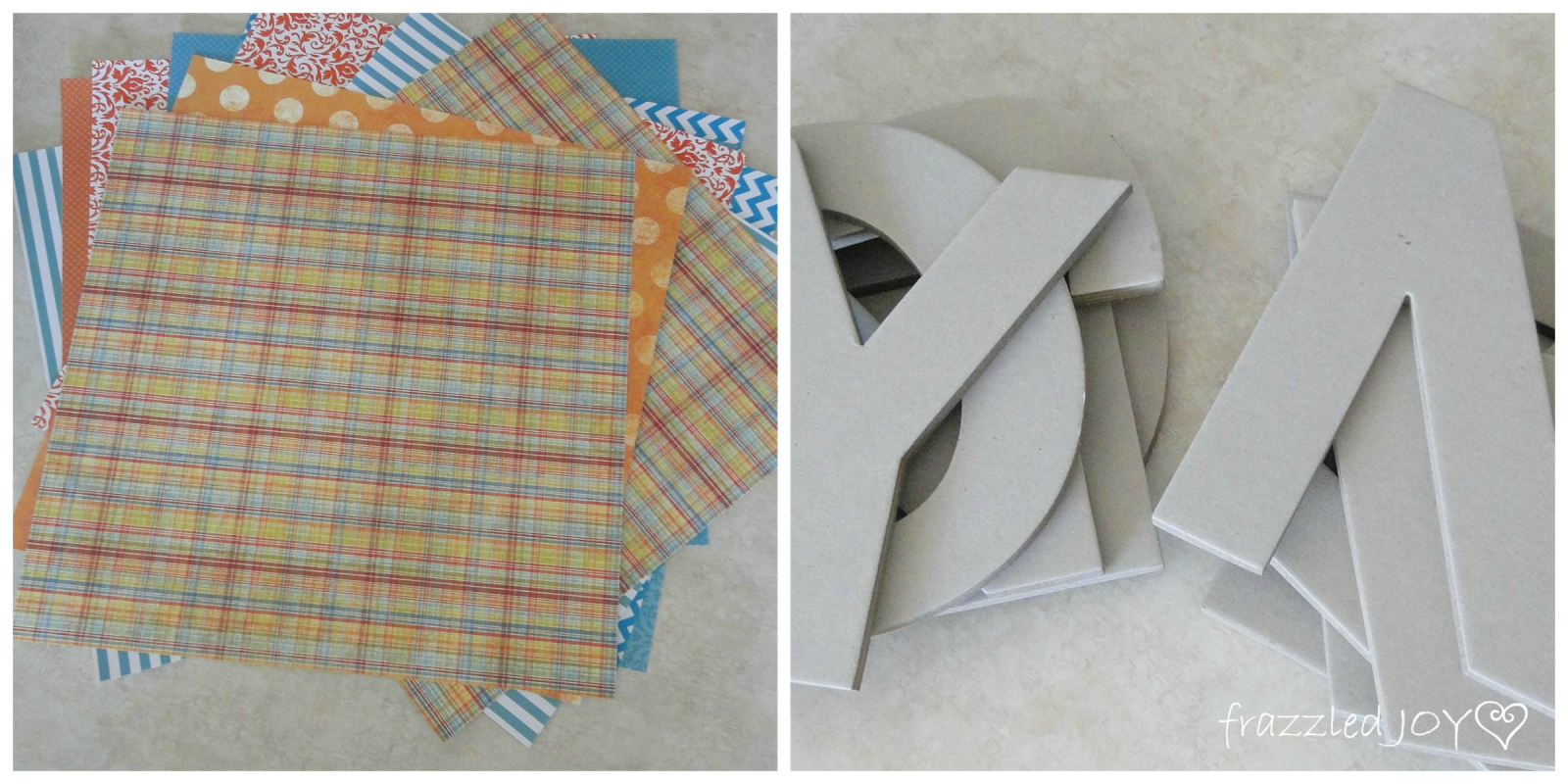 with chip board letters and some scrapbook paper.  Both of which were bought at Hobby Lobby 1/2 off.

I laid out my paper and arranged it until I got a look that was pleasing to my eye.
Then I stacked all that back up and did a little prep work on the letters. 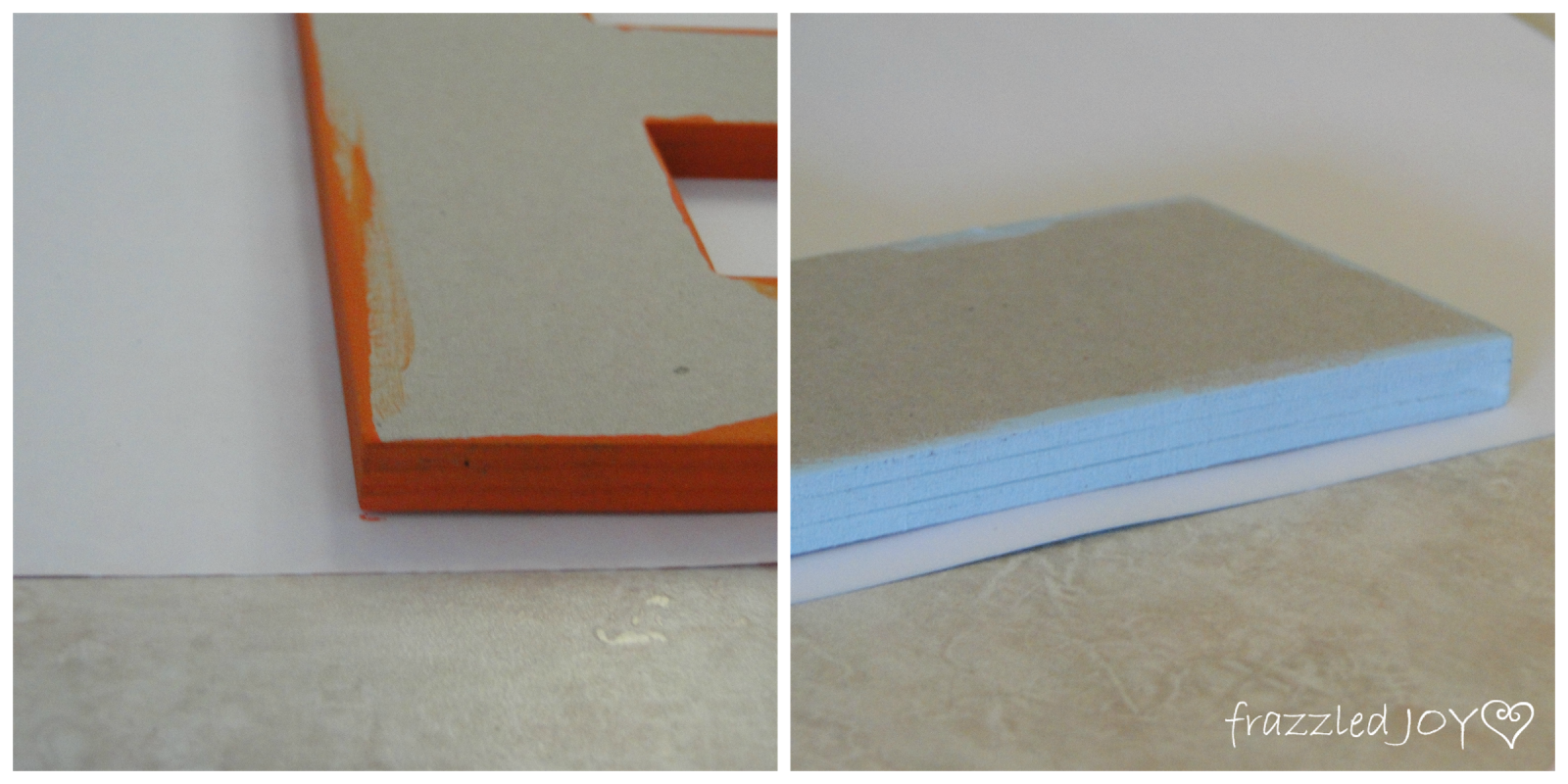 Using some basic acrylic paint from my stash, that was in that same color zone as my papers, I painted all the edges of the letters.  I alternated colors depending on the color of paper that was going on that letter.
Next I glue the paper to the letter – the whole sheet of paper. 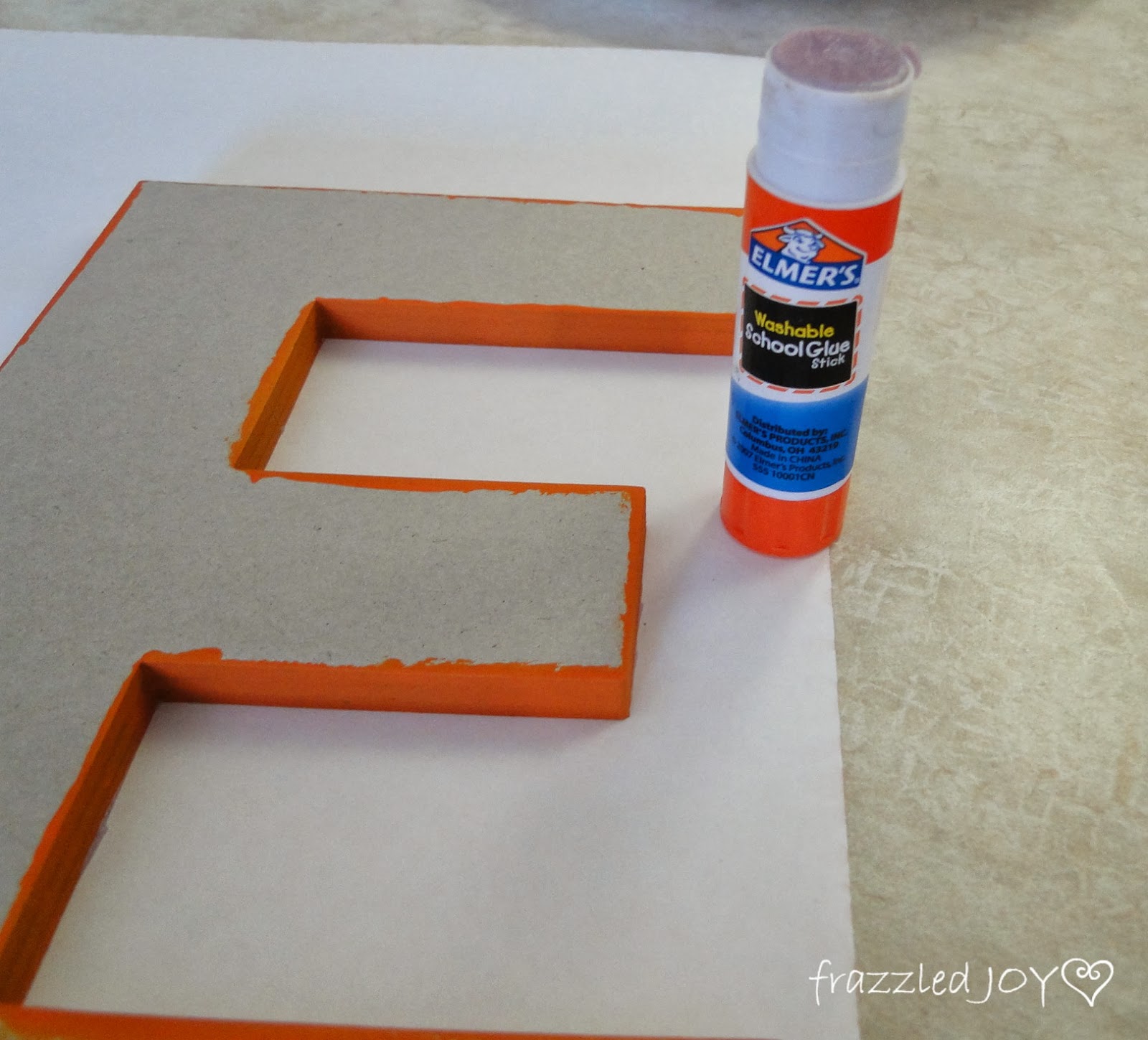 After gluing I pulled out my craft knife and my cutting knife {from the days when I used to scrapbook}, and trimmed off the excess paper. 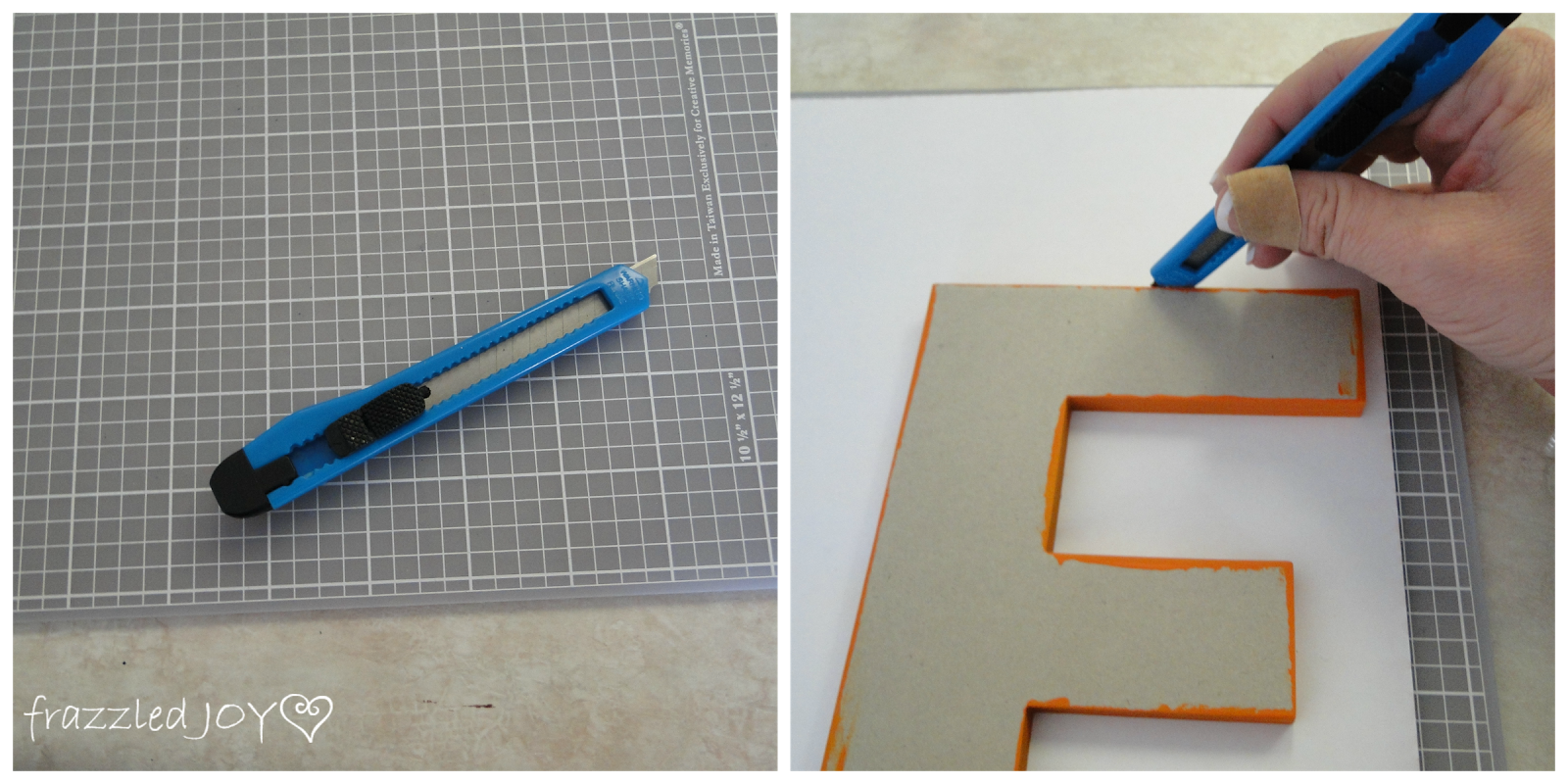 This was way easier and much more precise then tracing and cutting before gluing.  The end result: 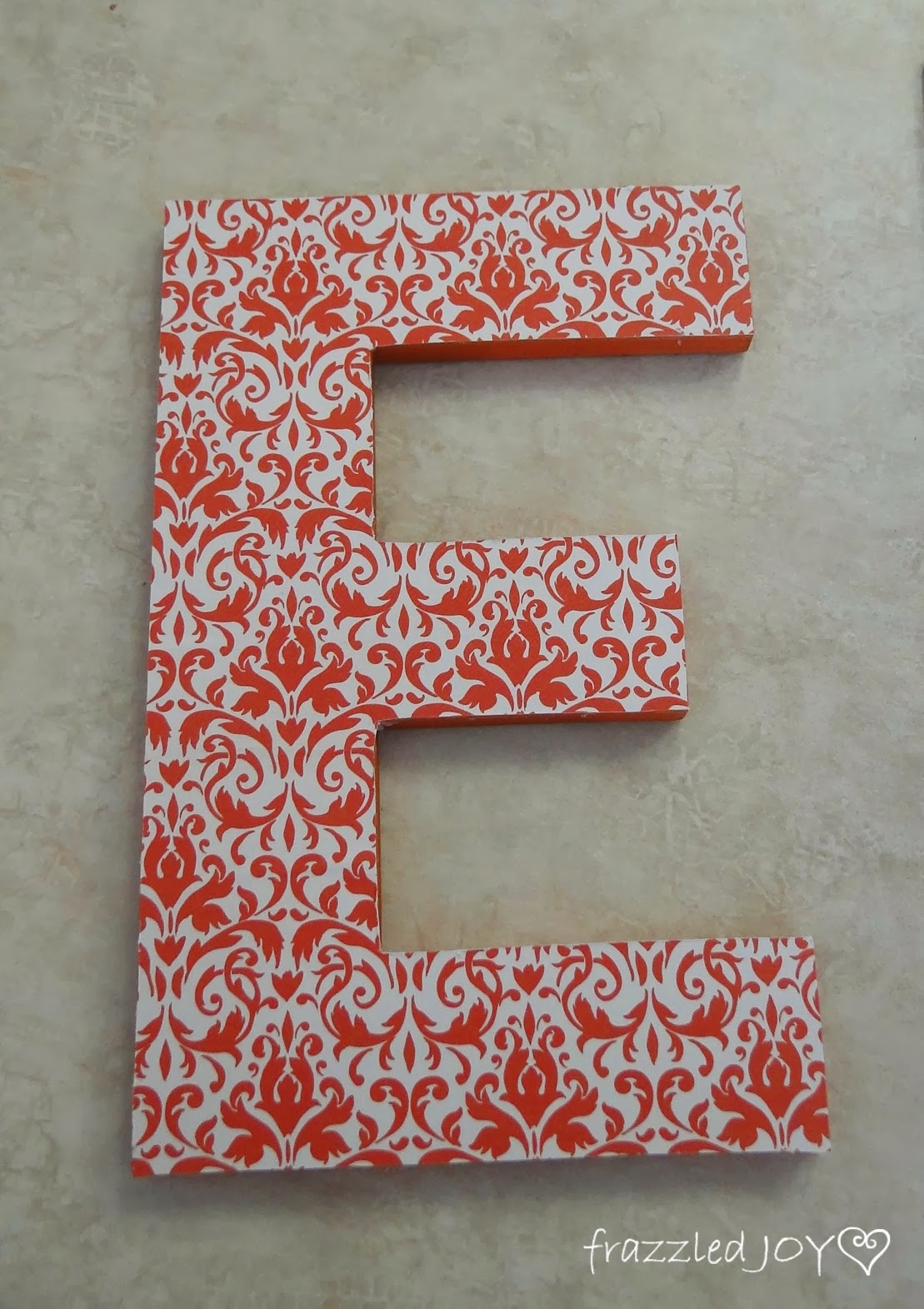 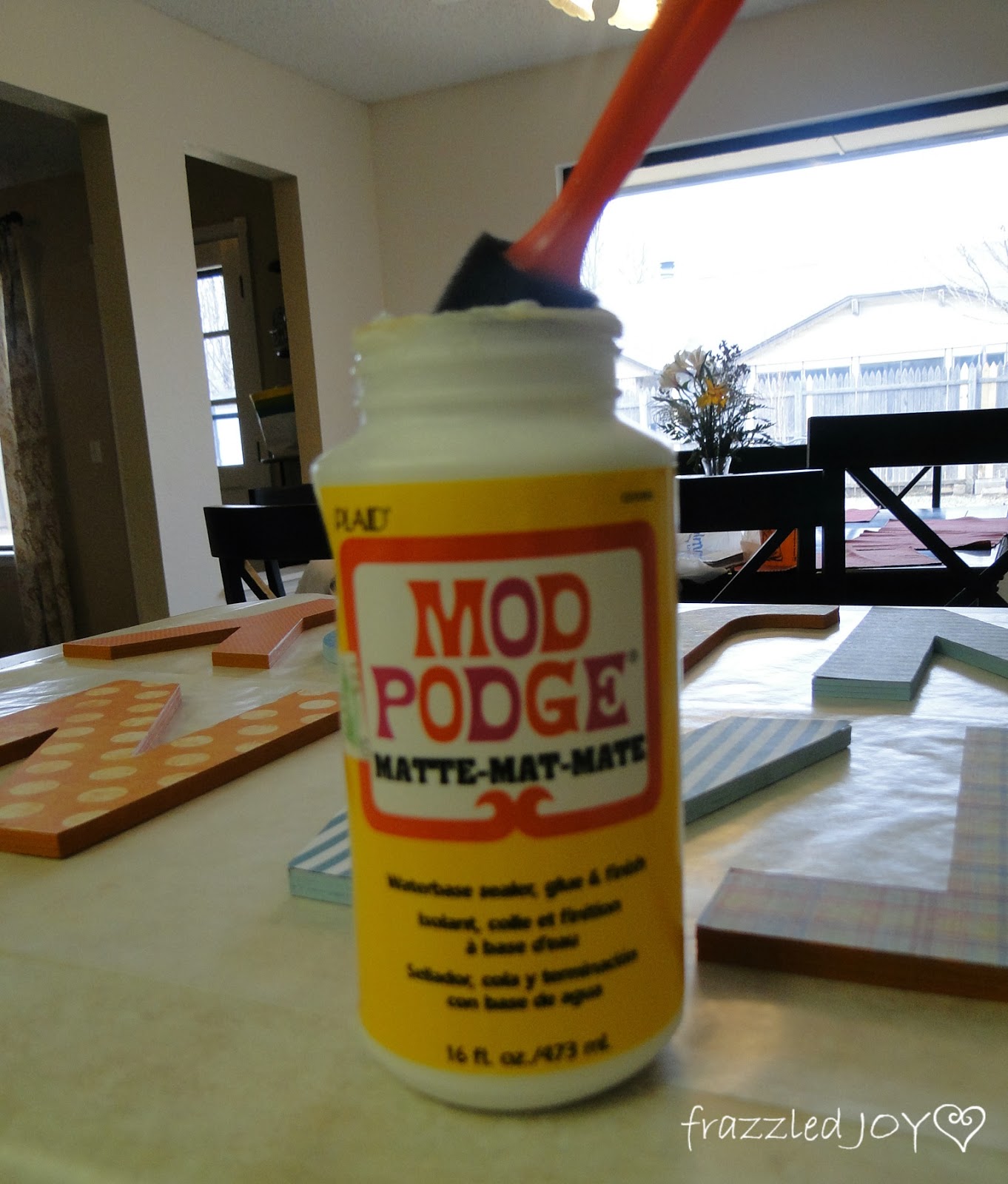 Again, I suppose you could have adhered the paper withe Mod Podge but it’s really messy {or maybe that’s just me}.  So, I laid out my now cute letters and gave each one two light coats{including the edges but not including the back}. 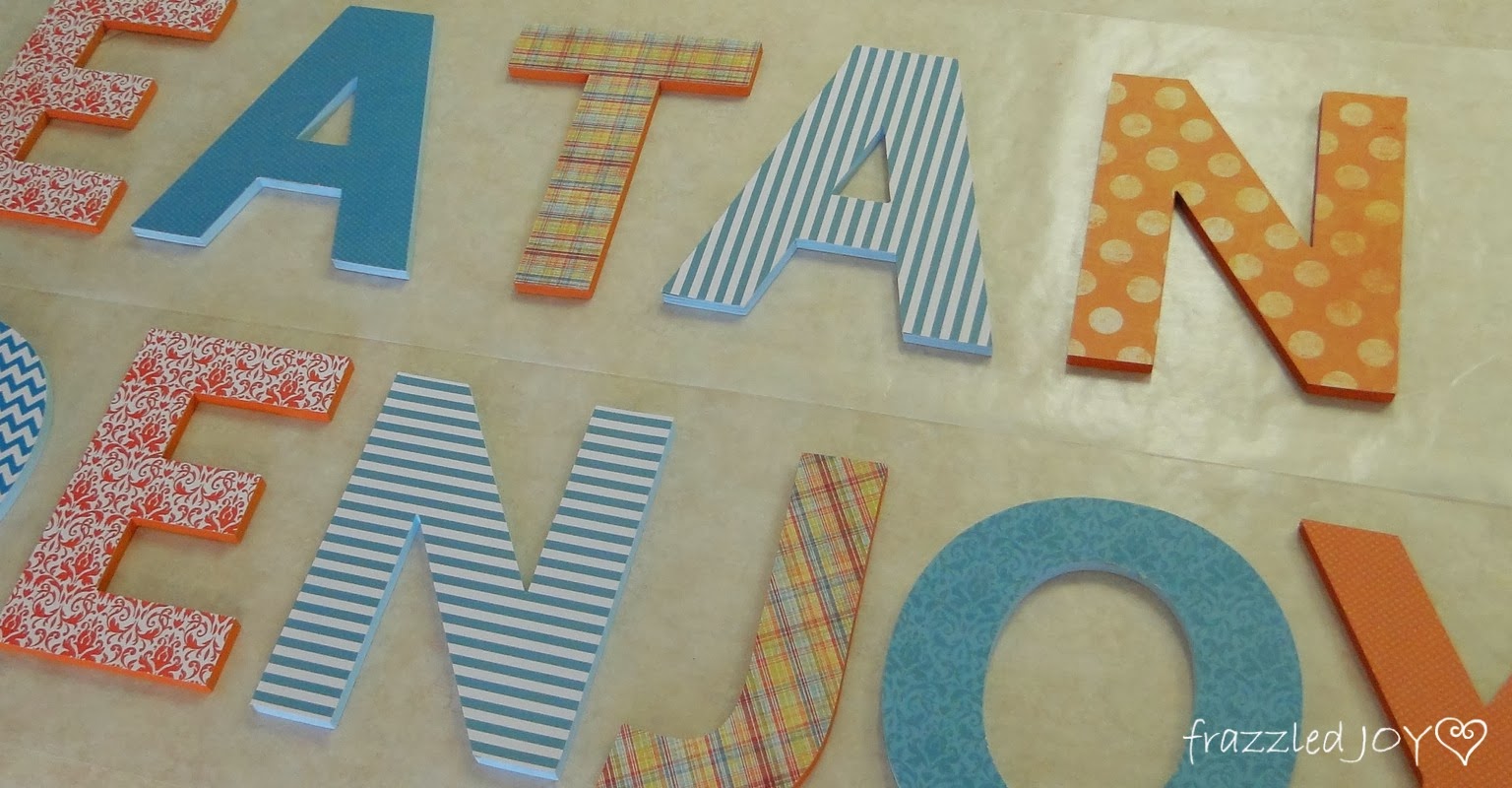 Just so maybe you won’t freak out like I did, the paper did bubble and buckle a bit when I put on the Mod Podge, but after it was dry all of that mostly smoothed out on its own.
I knew I didn’t need much to hang these, since they weren’t very heavy.  I found these at Hobby Lobby. 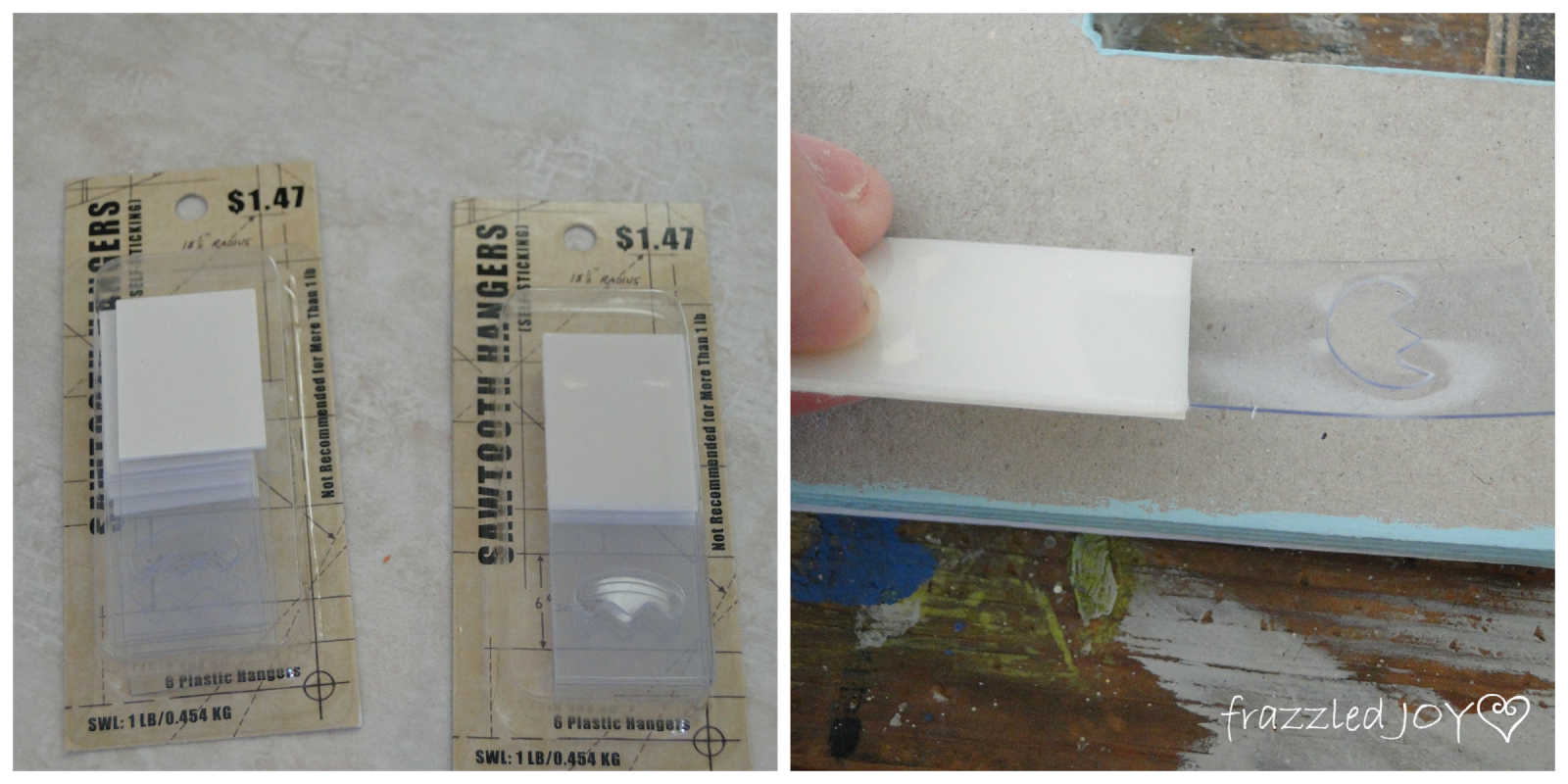 They are peel and stick people.  It doesn’t get any easier. Luckily I was not concerned about the letters hanging straight.  I actually wanted them to be like this – less stress on me about getting them level – ain’t nobody got time fo dat!!  If you want them to be straight you will have to use two hangers on most of the letters. 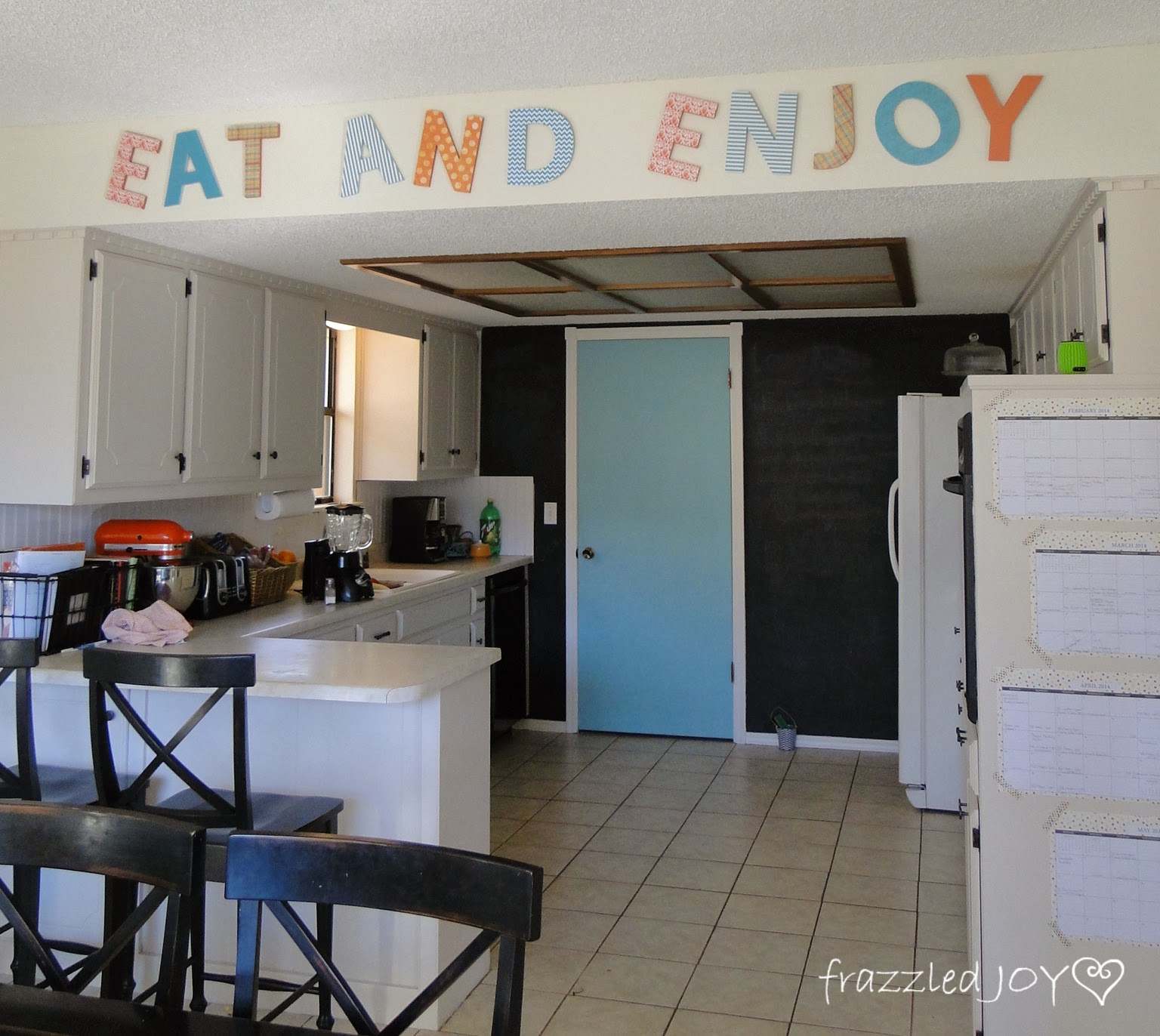 If you are wondering the saying is not original.  It came from one of my kiddos kindergarten teacher.  She cooked with them every Friday {awesome I know}, and this saying was at the bottom of every recipe sheet she would send home with the kids, along with a big smiley face.  🙂  Hey!  Maybe I need to add that!!  HA!!
I’ll be back tomorrow for Family Friday to share about that thing in the corner of that shot above – that thing I use to try to keep our family organized – TRY!!
Blessings friends!!
Linking up at Create It Thursday / All Things Thursday Blog Hop / Thrifty Thursday / Fridays Unfolded / Design It Friday / Frugal Friday / The Creative Connection / Creativity Unleashed / Link Party Palooza / Share Your Creativity / That DIY Party / Frugal Crafty Home Blog Hop / Take-A-Look Tuesdays / Tutorials & Tips Link Party / Hit Me With Your Best Shot

I finally got around to writing a blog post about

Springified my mantle today with my homemade art a

In light of National Woman’s Day yesterday I wan