I know that kids and money seem like they don’t go together.  I mean, really, why do kids need money – they have us right??  Well, think about it, everything you know about money – when, and from whom did you learn it from.  For me I learned some from my parents, but most I learned on my own.  My hubby and I have made plenty of mistakes with money, and we have done our best to learn from them.  But, we have said over and over that we wish we would have come into adulthood with better habits.

So, we have been intentional on teaching our kids about money, little by little.  As I said yesterday, the work they do around the house doesn’t always get connected to the money that they receive, but we do when we can. During our financial peace class we learned about having kids split their money into three categories – giving, saving, and spending.  We loved this because we felt it would give them a foundation in giving back, saving and limiting their spending.

Everyone has a different money personality.  My oldest will spend money on things here and there but doesn’t really waste it.  Thankfully he has learned to live within the budget we allow him. (yay!!)  My daughter nickel and dimes her money away – sonic, vending machines, ya know things like that.  My younger two are pretty good savers, cuz again – what are they gonna spend their money on when they have us??  (Although we do make them use their own money for some things – like when they ask to go get a pop at 7-11.)  My youngest is my best giver :).

We went with a very simple version and got the boys involved (my youngest was going through a pink phase at the time:)). 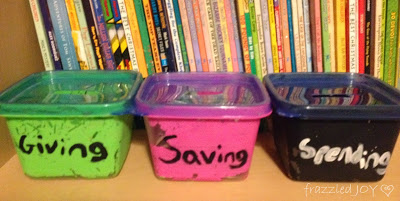 The older ones didn’t really need this they were already carrying wallets and such.  Remember I said yesterday that they get a larger amount each month that they are responsible for managing.  My oldest handles this by not carrying it all at once.  He knows he will most likely need gas money before he gets “paid” again so he keeps some at home.

They each have their own savings account, and when they have $100 in their savings tub we take it to the bank.  We pretty much let them decide how to split up their money.  Surprisingly they were fairly wise about it even at this age (far better than I ever would have been).  I am thankful for the heart my kids have where money is concerned – we are blessed.

I have a friend who gives her teenage daughters a clothing allowance each month.  Nothing too extravagant, but they buy all their clothes with that money (except for the occasions when mom is feeling nice).  So, if they want to spend it all on a pair of designer jeans – go ahead, just know you won’t be able to buy anything else until next month.  Fabulous!! Thinking of implementing this with my girlie :).

Teaching kids about money is a chore, but we believe it is necessary.  This generation is filled with a sense of entitlement that is ridiculously out of control, and the only answer is for us as parents to stop giving out sooo much.

Linking up with Ruth at Living Well Spending Less

Previous Post: « How Do Kids Get Their Own Money {Commission vs. Allowance}
Next Post: What Kids Need to Understand About Debt »